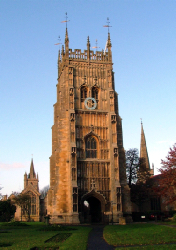 Abbot Clement Lichfield was the last genuine Abbot of Evesham, who had been consecrated in the Abbatial Manor House in Offenham on December 28th 1514. He built chapels into St Lawrence’s and All Saints; the Merstow Green Grammar School; and the Bell Tower was built as a gateway to the Monastic Cemetery.

Evesham Abbey was at this time one of the wealthiest and most impressive in the land.

By 1532 as Henry VIII, having failed to get a divorce from Catherine of Aragon; was excommunicated by Pope Clement VII.

Henry then decided to free himself from Rome and duly appointed himself head of the Church of England. Henry vowed to gain revenge by suppressing the clergy and taking over their Abbeys.

Abbot Lichfield, must have foreseen what Henry’s ultimate plans were and resigned his position. He witnessed the destruction of his Abbey and died in October 1546 and his body interred within the chapel at All Saints. It is not known why the Bell Tower was spared, but it remains unfinished, as left by Abbot Lichfield.

Our present superb Banner was dedicated by The Provincial Grand Master, Right Worshipful Brother B.M. Cooper in November 1998, when he expressed the wish that it should be a symbolic rallying point for Members of The Lodge. It was subsequently determined to establish a new tradition that all Initiates should receive a short address on its significance. 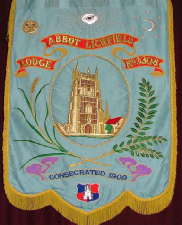 We are not sure when the first Banner was dedicated, but have assumed that it must have been soon after the consecration of the Lodge.

Our first banner dated from just after the consecration of The Lodge in 1909 and after sadly falling into a sorry state of repair, it was decided that we should have a new Banner which is a woven copy of the original.

The background is of Cambridge blue on which, at the head, are representations of the All Seeing Eye of The Almighty together with the celestial bodies of the sun, the moon and the stars. Immediately below are scrolls bearing the name and number of The Lodge.

On the imposing central cartouche is embroidered a representation of the Bell Tower, the only remaining complete part of the Abbey of Evesham and long regarded as a symbol of the town. This cartouche is flanked by an ear of corn and a sprig of acacia.

Beneath the cartouche is a scroll bearing the date of the consecration of The Lodge and at foot is one of the shields of the City of Worcester in acknowledgment that the Lodge was sponsored by The Worcester Lodge No. 280 – now referred to as our “Mother Lodge.”